A new non-profit has sprouted up and on Sunday it kicks off its first annual Artscape Concert Series in Collins Park, Miami Beach.

Global Arts Project, headed up by Kimberly Chmura, who has been producing concerts with her KCC Productions, has worked with a number of venues for years. But what started her thinking about creating her own 501(c)(3) non profit was a series of budget cuts that have left a void for people who want to hear live music without having to pay exorbitant costs and for her to produce shows that are top notch without breaking the bank.

"We want to bring entertainment and education to the public," says Chmura, who teamed up with musician Rafa Salono for Global Arts Project. Ray Breslin, president of the Collins Park Neighborhood Association, jumped on board with the idea of hosting free concerts in the park.

Previously, the CPNA had presented programs under the Artscape name, but hadn't used it in a few years. "The Artscape Concert Series is their trademark. I came in and we put together a program and Ray went out and raised funds for it. He wants to raise awareness for the beautiful park."

"We had a fundraiser. Ray knocked on doors, he's been on the phone. We have some major sponsors for our first time out. We are very grateful," says Chmura.

Global Arts Project as part of its education outreach will also start each concert with a student jazz ensemble. For the first series, the Student Jazz Ensemble under the direction of Ed Calle, Ph.D., Grammy winner and five-time nominee, who currently chairs the department of arts and philosophy at Miami Dade College North Campus, will perform. The group has played with Gloria Estefan, Julio Iglesias, Arturo Sandoval, Jon Secada, Vanessa Williams, and Frank Sinatra, among other notable performers.

"For next season, we've already reached out to YoungArts and New World School. We really want to 'edutain' the public," says Chmura.

There will also be a farmer's market on site presented by the Market Company. Vendors will be selling fresh fruit and vegetables, smoothies, and prepared foods such as ceviche, empanadas, and crepes.

Celebrating Black History Month, the program features the internationally-acclaimed and Miami-based vocalist Nicole Henry. Winner of a Soul Train Award, she has established herself as one of the jazz world's most acclaimed vocalists. Ms. Henry possesses a potent combination of dynamic vocal abilities, impeccable phrasing, and powerful emotional resonance. Her repertoire includes the American Songbook, classic and contemporary jazz titles, contemporary' standards, blues, and originals; while her accompaniment ranges from a simple jazz trio to a full big band. 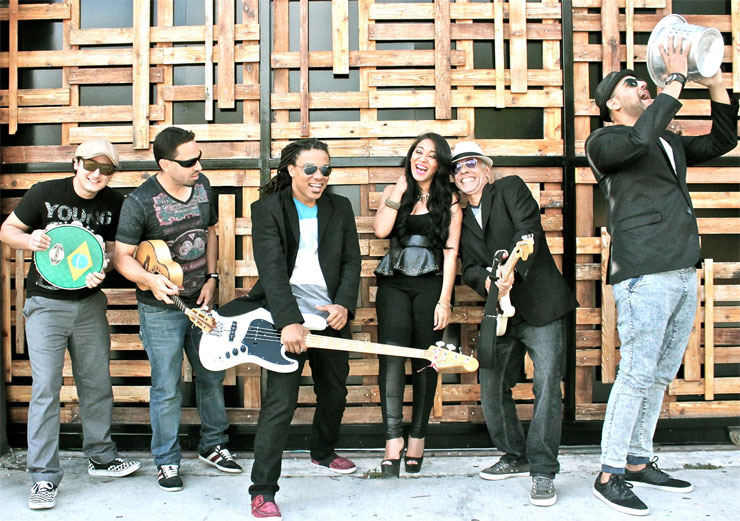 Celebrating Carnival and Mardi Gras with a performance by Batuke Samba Funk, a high energy Brazilian band that mixes rhythms such as Funk from the 70's with Afro Samba, Brazilian Big Band, Batucada, Soul, and R&B. The goal of Batuke is to "brazilianize" American sounds and "americanize" Brazilian sounds in a perfectly balanced fusion.

Celebrating Haitian Flag Day with Chardavoine's Creole Jazz Project from New York. Chardavoine is a concrete manifestation of Haitian jazz, a new genre emerging in jazz today. This amazing guitarist has covered the gambit of musical styles through the waves of his guitar. He is a great musician, a talented artist and a refined professional.

Celebrating Hispanic Heritage Month with a rousing performance by Timbalive, a group of highly trained musicians from Cuban conservatories. The sound of Timbalive is an inimitable blend of Caribbean rhythms, Popular Cuban Music, lyrics and arrangements designed with the dancer in mind. The success that Timbalive has achieved in a short period of time is the result of passion, perseverance and hard work, to claim what in the music scene is called their "Own Sound".

Link to the article

the new cd by" The Chardavoine band" entitled" The Creole Jazz project" will be available in December, 2015
dates of all the release parties will be listed we might be coming to your hometown. The cd will consist of  Chardavoine's original compositions merge with afro/Haitian rythms.

Your cart is empty
Visit The Shop
Scroll Up